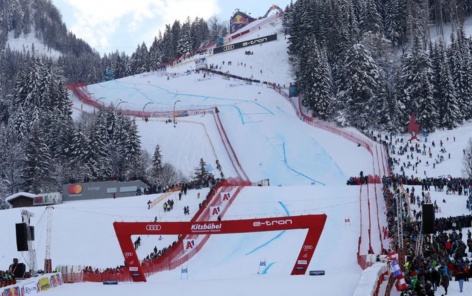 Year after year, some 100,000 spectators flock to Kitzbühel to watch the men’s Audi FIS Alpine Ski World Cup competitions in super G, slalom and the awe-inspiring “Streif” downhill course. This year, the event celebrated its 80th anniversary which had special festivities and increased prize money for the winning athletes.

Before the season, organisers of the traditional Hahnenkamm races announced a 25 % raise in prize money to mark its 80th anniversary. The increase meant a total of €725,000 was up for grabs at this season's event. "We didn’t want to invest the budget for the 80th Hahnenkamm races into a jubilee party. The local ski club preferred to set an example for the athletes," said chief organiser Michael Huber.

”Befitting with the Kitzbühel Ski Club and Austrian Ski Association this important milestone of the legendary Hahnenkamm Race during the Audi FIS Alpine Ski World Cup was celebrated through showcasing the sport and the athletes. Three outstanding races played centre stage of the 80 year anniversary event, celebrated by record crowds and followed by viewers all over the world. This is the best possible promotion to showcase Alpine Skiing.”

On 25th January, the Kitz Legends Night celebrated the anniversary and the “Kitz Inspiration Award” was handed out. The award honours an athlete who is celebrated internationally, has excelled on the snow with outstanding performances, and most importantly is an inspiration for their contributions outside the World Cup. The award winner in 2020 was Lindsey Vonn, who is a role model thanks to her sporting achievements and her social commitment. Vonn was on location to pick up the trophy.

One of the other highlights of the night was the appearance of the legendary band "masters of disaster" with the successful ski legends Ivica Kostelic, Jan Hudec and Matteo Malusa, who reinterpreted classics of music history with their rocky sound.

Audi has supported the Audi FIS Ski World Cup as its title sponsor for nearly two decades and was there for one of this season’s pinnacle events. The brand worked with the Hahnenkamm race on numerous activities, which were centred around the topic of electric mobility this year.

The Audi e-tron, the brand’s first fully electric model, played a starring role at the event: 50 of the 85 cars of the shuttle fleet were electric and the e-tron, in addition to other models, were deployed at the Audi driving experience in nearby Kirchberg.

For those seeking a personal experience of the legendary “Mouse-Trap” section of the course with its 85-percent gradient without putting on skis themselves, Audi Austria designed an app that initially takes them up the Streif in an Audi e-tron and subsequently back downhill from the start house toward the Mouse-Trap on skis. Skiing legend Hans Knauss and presenter Stefan Steinacher serve as commentators of the performance. The app is called “#unraceable Ski Challenge” and available free of charge for iOS and Android at the respective online stores.