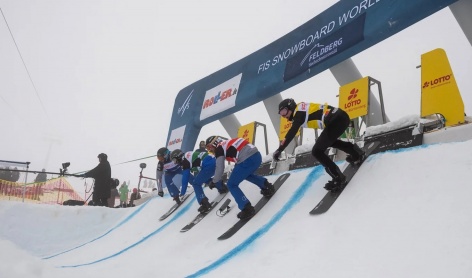 Unfortunately, on Tuesday it has been announced that the FIS Snowboard Cross World Cup competitions in Feldberg (GER) have been cancelled.

Hochschwarzwald Tourismus, together with Snowboard Germany and the organizing committee had done everything possible to hold the World Cup competitions for snowboard cross athletes from Feb 01-02.

Temperatures in the past few weeks were not really winter-friendly in the Schwarzwald region. The high temperatures did not allow for natural snow fall, nor for snow production. Therefore, the combination of lack of snow, high temperatures and warm weather forecast for the next feew weeks, forced the Organizer together with FIS to cancel the scheduled World Cup events.

Florian Eder (course designer) confirmed that “snow conditions on the slope did not allow for a World Cup snowboard cross course build."

This is the first time in four years that the Organizing Committee is not able to hold the competitions in Feldberg.

OC president Thorsten Rudolph commented: “After the successful World Cup events in the past, we really wanted to put on a a good snowboard cross show for all the fans again this year. It is unfortunate that we cannot host the event this year, I especially want to thank all the volunteers who have been working so hard for months in preparation of this event. We do hope for some snowfall in the nearest future, as we are supposed to host the Audi FIS Ski Crosss World Cup here later in February.”

Snowboard Germany has confirmed that unfortunately with a standard format and mixed team format competitions as part of the original program no postponement is possible at Feldberg.

FIS will communicate any possible replacement for the competitions at a later time and wants to thank the organizing committee for their efforts and commitment.