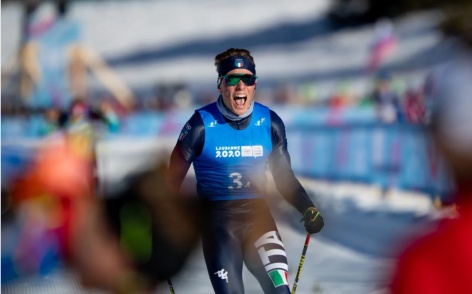 Victory for Norway in the Nordic combined mixed team event at the Lausanne 2020 Winter Youth Olympic Games came with such ease on Wednesday that it could almost have been a practice run.

The Norwegians finished 1 minute 19.3 seconds ahead of Austria, with Italy making a late surge to claim bronze.

While the nation is a traditional powerhouse in cross-country skiing, the team needed their ski jumpers to do well to have a good starting berth.


A stellar showing on the hill at the Les Tuffes Nordic Centre in the morning meant Norway started with a 12-second lead by the time the event moved to the Vallee de Joux for the relay.

The gap widened with each exchange and by the time anchor skier Nikolai Holmboe (NOR) took to the tracks, he was ahead by close to a minute.

“We were confident coming into the race,” said the 17-year-old, now a winner of two golds and a silver at Lausanne 2020. “I was a little bit nervous, but no one was chasing me. I could almost relax.


“I know that I have a good sprint, so as long as I have a good position in the last hill, I have control. It feels very great. My goal for the season was to do good here, so I’m happy.

"It’s high level here [at the YOG], so I have to train harder. Next year I hope for junior world championships.”

Even the Austrians knew that the result on the track was almost inevitable.

“It’s clear that [Norway] are the kings of cross-country skiing,” Witta Luisa Walcher (AUT) said. “We all did what we could and in the end we got second and I think it’s a very good job that everyone in the team did.”


Ski jumper David Haagen (AUT) added: “We didn’t expect the Norwegians to be that strong on the hill, but they did a good job.

“Conditions were quite fair today, there wasn’t as much wind as the days before. But the Norwegians had a better day than they did in the last days. We did our job, and I think both nations are satisfied with the result.”

With first and second place looking like a foregone conclusion, it was the battle for third that provided some late drama.

Italy had given up its lead over France in the final exchange, falling behind by some 11 seconds. But Elia Barp (ITA), with a point to make for his nation’s skiers, powered home almost nine seconds ahead of the French.


“In the last climb I saw him [Luc Primet, (FRA)] in front of me and he looked so tired,” Barp said.

“When I caught him, he looked at me and was like ‘No’. When I passed him he didn’t follow me and at the finish line I realised that we were third. I’m so happy about this.

“For sure, we are also cross-country skiers. Not only the Scandinavian guys or Russian guys. This is a way to let the world see us and know that Italians can ski too and take part in this sport.”

Austria and Norway have shared the spoils in the Nordic combined competition, with the former taking the men’s and women’s individual golds.